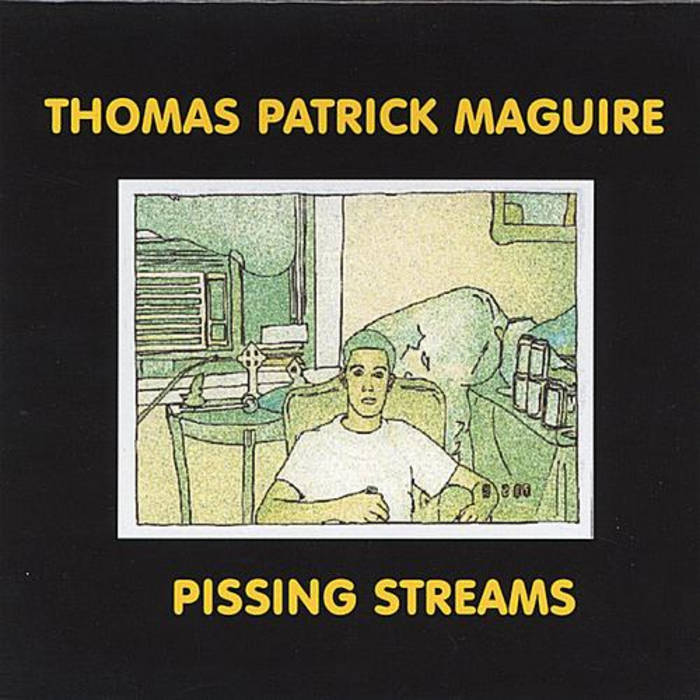 All songs written by Thomas Patrick Maguire.
Recorded and mixed by MIke Estrella at Section 8.
Tracks 22, 24, 25, 26 remastered by Casey Holford at Golden Rule.

Bernard King on PISSING STREAMS:
Twenty-one bottles of beer from 2004 in spare arrangements of guitar drums and bass that sound like more. Observational vignettes. Some of these songs have outlasted retirement age, some have not. Papertown has been burning the whole time. The ghost of an older accent. An interesting thing about this album is its piss-yellow lettering. Bittersweet memories of New York nights saved like restaurant chopsticks. Phantom jazz comes in through the left ear. “Lie to me until you speak the truth.” An honest man in a two-faced world. These songs are built on a basement foundation of solid chords generationally durable. He’s Underneath. Shades of Paleface, and the VU’s “Beginning to See the Light.” “Leaving Now” is the forgotten show-closer. An “Irish goodbye.” Everyone’s either going or staying. “When she left the building my pride dropped… My pride’s a fucking castle, it’s falling brick by brick.” It’s nobody’s fault. Roots Antifolk. “Issues” is not “Control Issues” but an earlier version. Common threads to Phoebe Blue and Prewar Yardsale. “Won’t you take me for a drive, won’t you look into my eye, won’t you stay here with me?” He takes a coward’s stance, too sad to ask her to dance. That fateful moment, the other guy gets the girl. The runaround of a vicious cycle. “Seen you before don’t remember your name because my mind is blurry,” but he wishes she were his. The Toin Coss came up heads and he was tails. Another “Lost Weekend,” the binge when the parents are gone. “Dancing and drunk in Francis’s room isn’t a good thing to do.” Becoming sober. A song beautifully takes flight but it’s a Kamikaze attack… she’s leaving again! It was a bad decision to go to that party. Something inside is blocking him… a dyslexic relationship. Old-school Antifolk chorus. “Christian Love” is a punk song in acoustic disguise, anthem for American hypochristians. “My memory bank holds her lipstick marks.” A rock and roll song in Basement Folk disguise. Bitter memories all the way back to the delivery room. There’s even a priest. “I want to reach out but all I grab is air, sometimes I’m concerned, sometimes I could not care.” All his dreams have fallen into other people’s laps. “That they would… if they would… then they would…” stop making fun of him. “With your fabulous bullshit chemistry.” He’s not gonna lie about his situation. “Sometimes I’m not the man you want me to be, sometimes I just want to be free” is the catchy, feel-good B-side. A Responsible Man who told the truth. “Nothing that Stitches Can’t Sew,” the hit inconspicuously at track 16. He can keep getting up and going out again after he gets sewn up. All of a sudden, more beers appear on the bar in front of us. Who bought them? Thomas Patrick Maguire. The forgotten anthem is the final cut. “Ritalin is raining down, see if you can catch it now, lifetime of disease… It doesn’t matter what they say, it doesn’t matter, weave your way, from this lifetime of disease, lifetime of conformity… How can you help someone else, if you can’t help yourself, sounds kind of funny to me.” The audience doesn’t give a fuck. “I wanna go where the standards are low, I wanna know a place that no one else knows.” Antifolk.

Bandcamp Daily  your guide to the world of Bandcamp